On Friday 12th of June, 2015, 47 high school students came to the University College London to take part in the first English Brain Bee, a neuroscience quiz-style competition. Participants were mainly Year 9 students from the nearby Maria Fidelis Catholic School, however, some were at Year 10 in Simon Balle School in Hertford. 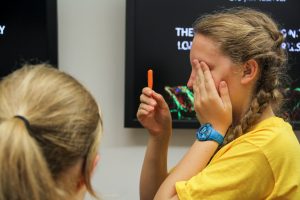 After months of preparation, their knowledge about the brain were tested during various assignments: a written test and a neuroanatomy section where they had to label structures on real-size brain models. During the lunch break they not only had the opportunity to explore some fun neuroscience activities we had prepared for them, they also had a chance to meet neuroscience students and professional neuroscientists to discuss possible career pathways. After a final live question-and-answer session, we were able to announce our final winner and award prizes to our top contestants. Running the competition annually, we aspire to spark an interest for neuroscience amongst a new generation of students and motivate them to choose exciting science careers.

The English Brain Bee is the English chapter of the International Brain Bee, which was founded by Norbert Myslinski in 1998 to encourage young students to learn about the human brain. Worldwide, approximately 30,000 students compete annually in countries such as the USA, Nigeria, and Macau.

‘It was such a pleasure to see all the students doing the experiments we had prepared for them and seeing that they were genuinely interested in the science behind them,’ observed Marta Tondera of the Brain Bee organising committee. Finally, all scores were tallied and the top ten participants were selected to take part in the ultimate question-and-answer session, which would determine the champion of the competition. 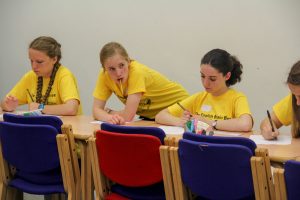 Elspeth Grace from Simon Balle School became the first-ever champion of the English Brain Bee. She was awarded an engraved trophy and a £100 Amazon gift voucher. Runners-up were India Warman and Georgina Goddard, both from Simon Balle School. The Brain Bee was not only an enriching experience for the prize-winners, but was enjoyable for all participants, volunteers, teachers and judges involved. ‘I had great fun on the drive in’, said Dr Gareth Jones, a teacher from Simon Balle School, ‘A minibus full of kids talking about the hippocampus and basal ganglia! Cool huh!’

The English Brain Bee will continue to take place annually. The vision is for it to branch out into smaller, local-scale competitions across the country, to reach an extent comparable to countries with the more established Brain Bee communities, such as the USA or Australia. By doing so, the Brain Bee aspires to spread the word of neuroscience amongst the next generation of students, sparking an interest for scientific research as a whole and motivating the pursuit of neuroscience as a career.

The 2015 Brain Bee would not have been possible without the generous funding we received from UCL’s Volunteering Service Unit and The Physiological Society (www.physoc.org). We would also like to thank to the organizing committee of the Brain bee 2015 Meesha Patel, Marta Tondera & Katarina Zimmer.

More information about Brain bee 2015 can be found here: http://www.physoc.org/sites/default/files/page/PN100.pdf on page 12.

Take a look at our memories from the event!