The International Brain Bee was founded in 1999 and is the world-wide neuroscience competition for high school students. Directed by founder Dr. Norbert Myslinski, the Brain Bee motivates students to learn about the brain, captures their imaginations, and inspires them to pursue neuroscience careers to help treat and find cures for neurological and psychological disorders.

Currently, more than 60 nations and 175 chapters are engaged in coordinating Brain Bee programs around the world, and this number is rapidly increasing. About 50,000 students participate across all six continents every year, and more than 600 neuroscientists have been involved with organizing and judging the events. An Alumni Club has been established to sustain the global community of young scientists into their university and career tracts.

The Brain Bee competition platform is organized on three levels: local, national, and international. Local scientific institutions are licensed by the International Brain Bee (IBB) to carry out city-wide or regional events, engaging students from 14-19 years of age. The first-place prize winners are granted the opportunity to compete at the national level. The National Champions are, in turn, invited to represent their country at the annual International Brain Bee competition, which is hosted by different neuroscience organizations during an international conference.

The Format of the Competition

The format of the competitions vary between events, but the most common program includes a live judging panel of neuroscientists posing questions about neuroscience directly to the students, in a style much like a Spelling Bee – hence, the name “Brain Bee”. Additional competition components include a neuroanatomy practical, neurohistology identification and characterization, patient diagnosis based on interactive medical examinations and video footage, and written exams.

Partnerships with and support from universities, organizations, foundations, and companies make the Brain Bee possible. All coordination is done on a volunteer basis by leaders among scientific communities.

The Brain Bee in the UK

The first British Brain Bee took place in 2015 at the University College London. It was set up by a group of undergraduate students and was led by Katarina Zimmer. In 2016, due to limited resources, only a few schools participated in the England Brain Bee. In 2017, a new team has been formed. The national coordinator of the UK Brain Bee since 2016 is Martyna Petrulyte, a BSc Biomedical Sciences (Anatomy) graduate from the University of Aberdeen.

In October 2017, the British Brain Bee Charity was established to raise funds for essential neuroscience and psychology education in secondary schools.

The British Brain Bee is not part of any universities or commercial companies and is solely run by volunteer undergraduate and postgraduate students and scientists.

Since 2017, the Patrons of the British Brain Bee is Sir Colin Blakemore, Prof Paul Bolam and Prof Uta Frith. 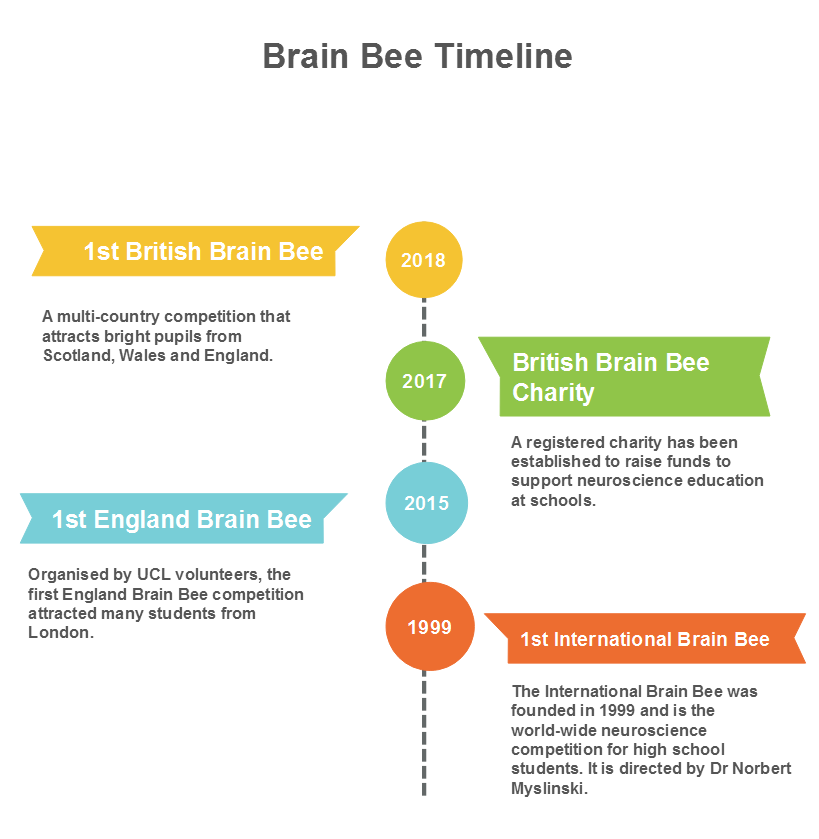